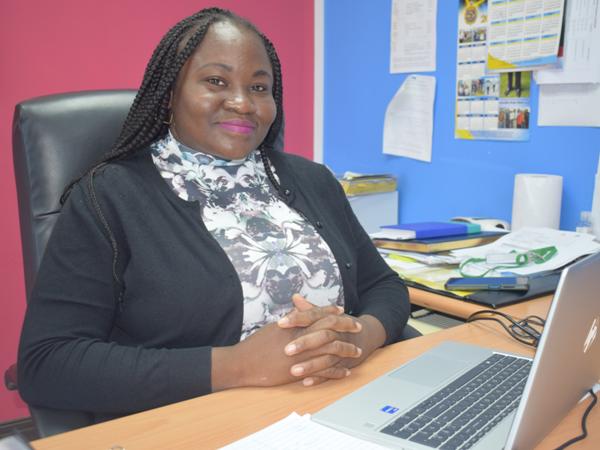 Strong, ambitious, hardworking and very resourceful are just a few words that define the character of Deputy Inspector of Poor in the St. James Municipal Corporation’s Poor Relief Department, Shellian Robinson who lives by the quote: “If I stand for nothing I fall for everything.”

The bubbly 37 year old  has climbed the organizational structure at the Municipal Corporation from her initial employment as a Secretary in the Administration Department in 2008, to her current post, where supervises seven employees, including  six Assistant Inspectors of Poor and a Secretary.  As Deputy Inspector of Poor, Robinson supports the Inspector of Poor and is also the Homeless Coordinator and Indigent Housing Officer for St. James.

“As the Homeless Coordinator, I ensure that under the established systems, care is provided for the homeless and that homeless street persons are provided two hot meals daily, seven days a week. I also ensure that they also have access to a daily shower and change of clothes-catering also for those who take advantage of nightly lodging at the Refuge of Hope Night Shelter,” says Robinson.

As Indigent Housing Officer, Robinson’s duties include giving assistance Registered Poor which covers repairs to their homes, building new houses though partnerships with Food For The Poor. Ms. Robinson enjoys her job, pointing out that she is happy to be able to help improve the lives of less fortunate living in the parish.

“Being Deputy Inspector of Poor exposes you to the reality many vulnerable groups face. Once you identify issues, you just want to ensure the right services are offered to alleviate the challenges. Some cases require going beyond the limitations and partner with other entities to get the right results,” admitted Robinson.

She suggests that persons entering the Poor Relief field must have a loving heart and be considerate as they will encounter situations that can take a toll on their wellbeing stating that “If you don’t love people do not enter the field. It is a tough job that requires dedication and true love. If you don’t have empathy, or you are not a sympathetic individual try another field.”

Ms. Robinson, a graduate of Mt. Alvernia High School, holds a Bachelor’s Degree in Human Resource Management and an Associate Degree in Marketing and a professional Diploma in Human Services. A firm believer that education is the strongest foundation one can build their life upon, Shellian admits that her late mother had a remarkable impact on her academic and career choices.

“I admire my mother greatly as even though she had struggles, she was never deterred. She always told me “once there is life there is hope”. She always said that I could reach out to people and convince them or advocate on their behalf. In that regard, she pushed and encouraged me to get involved in marketing and Human Resource Management,” Robinson stated.

Defining herself as ‘a woman with a big personality’, Robinson revealed that while she loves the experiences and challenges that are an appendage to being Deputy IOP, her original career choice was Marketing and Human Resource Management.

“I always had a serious desire to go into the field of Human Resource Management. Added to my mother’s prodding, during my early days in the working world, I realized that not many people stood up for staff. Employees rights would sometimes – in my perspective – be breached and violated; I wanted to stand up for these persons,” said Robinson.

Before starting her sojourn at the Municipal Corporation, Robinson volunteered as a National Youth Service (NYS) worker and then received employment as a Customer Service Representative in the Business Processing Outsourcing (BPO) sector at E-Services Montego Bay.

“I love my independence and always try to retain it. Sometimes I hear that I am too strong, but I believe it is because I depend on no one to get things done, so I started out early as a NYS worker while in the sixth form; I also got a summer job at Doctor’s Cave as a Cashier. I eventually transitioned into Customer Service at E-Services Now, looking back, I have never been unemployed beyond two (2) weeks since landing my first job in 2003,” said Robinson with a smile.

“In April 2008, I gained employment as Secretary (1) in the Administration Department at the St. James Municipal Corporation (Parish Council at the time). I thought it was a good start in the sense that I intended to use the opportunity as a means of working my way up to Human Resource Management. I worked closely with the then Personnel Officer, Ms. Payne (now deceased) and Director of Administration Ms. Corbett (retired); they were both in HR management and they encouraged me along,” Robinson recalled.

As time passed and Robinson continued to pursue her dream of transitioning to Human Resource Management, and was elevated from the Typing Pool and assigned to the Registry.

“I learnt a lot while working in the Registry as a Records Officer, because you are exposed to a lot of information about policy and even about staff benefits. During my time there I delved a bit into the Staff Orders; I intended to use this knowledge to edge my way into the HR department,” stated Shellian.

TWIST OF FATE
While Shellian had plans for her career, her dreams halted as life seemingly had different plans for her. As if it was her calling, Robinson would soon be bombarded with encouragement from senior staff to join the Poor Relief Department, which was in need of Poor Relief Officers.

“It is actually my own effort to work in HR that led to me being in Poor Relief. I believe it is my attitude towards work and my commitment to the getting the job done that caught the eyes of the Inspector of Poor at the time, Merline James Russell, and then Chief Executive Officer, Winston Palmer. They saw in me the capacity to do the job well and encouraged me to join the Poor Relief Department in June 2012,” Robinson recalled.

She admits that upon entering the Poor Relief Department, she was hesitant at first, but says the continued encouragement convinced her. “At first I was literally scared as the Poor Relief Department as it was a far cry from where I wanted to be in Human Resources. Despite the obvious challenges,  I must admit that it seemed a daunting task at first, but, being who I am, it was a situation I would not avoid,” stated Robinson.

She continued, “As time passed I was encouraged by the work we did and the results which saw clients’ lives being improved. When you see students getting meaningful support for school, clients getting access to counseling, assistance with housing, burials, and real support for the elderly - particularly those without children who see us as the family they never had - it gives you a great amount of satisfaction that you are really having a positive impact.”

CHANGING THE STATUS QUO
After six years as an Assistant Inspector of Poor, Shellian was eventually appointed as the Deputy Inspector of Poor in November of 2018.  Speaking to her impact on the department, Robinson says above all, she treasures the relationship she shared with clients and appreciates her staff and that her job has increased her engagement with staff and provides a bird’s eye-view of the entire parish.

“Now that I am exposed to the happenings that impact the entire parish I try to ensure that the members of my team are encouraged. It is integral that they balance their work life, and their personal and social lives. We work hard so I do take time to encourage the lighter side. I try to keep the staff focused, but at the same time remind them not to let the work stress them… just relax when time allows. I still exercise an innate desire to encourage staff, and to assist with entitlements, staff benefits and welfare,” says Shellian.

PLANS FOR THE FUTURE
Robinson still has dreams of ascending to higher heights. Her ambition is aimed at being elevated to the Board of Supervision (for the relief of the poor in Jamaica), the statutory body operating under the portfolio of the Ministry of Local Government and Rural Development.

“I believe that the Board of Supervision is another area of interest for me because that is where the decisions are made. I would like to have some positive input at that level because I believe that with my experience, I can bring something positively impactful to the table,” concluded Robinson.