Motorists who traverse the Howard Cooke Boulevard in Montego Bay, while being warned for prosecution, are also being encouraged to adhere to newly installed signage along the thoroughfare and to obey the traffic lights to avoid blocking intersections.

Speaking against the background of a record four hundred and eighty four (484) road fatalities across Jamaica in 2021, Deputy Mayor of Montego Bay and Chairman of the Infrastructure and Traffic Management Committee, Councilor Richard Vernon is suggesting that action had to be taken to put the right signage and road infrastructure in place to ensure that the thoroughfare is safe for motorists and pedestrians alike.

“What we have done, coming out of our last infrastructure meeting is to identify areas in Montego Bay that need proper signage as part of plans to implement a comprehensive signage system right across the parish, with emphasis on roads in the city. The St. James Municipal Corporation has commenced with the installation of signage in the grid-line on Howard Cooke Boulevard so persons can get a better understanding of the purpose of the grids,” said Deputy Mayor Vernon.

According to the Councillor Vernon the grid-lines will not only help to prevent accidents if there is a breach of the road code, but they are also in place to help reduce or eliminate traffic congestion.

He stated that “as a motorists approach the grid, if they realize that the lights are changing to red, they should stop before they get onto the intersection. I they stop in the intersection on the grid, they will cause congestion which could lead to them facing penalties from the Police. The Corporation has been guaranteed by the Jamaica Constabulary Force that their members will be frequently and vigorously monitoring the intersections”, said Councillor Vernon. 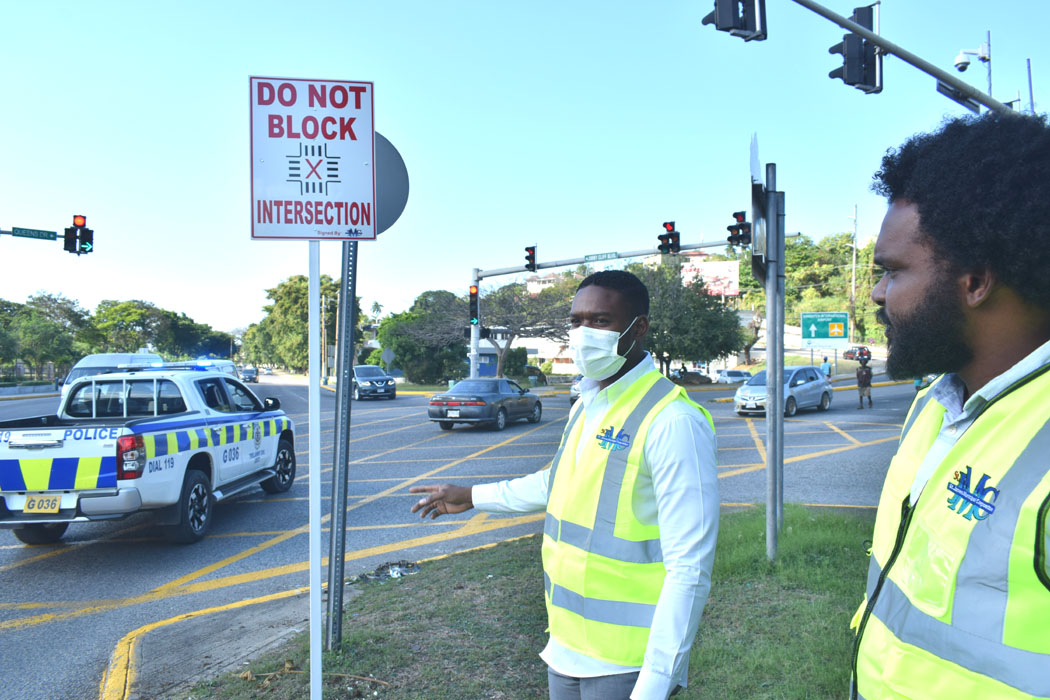 Deputy Mayor of Montego Bay and Chairman of the Infrastructure and Traffic Management Committee, Councillor Richard Vernon points to recently installed “DO NOT BLOCK THE INTERSECTION” sign at the intersection of Howard Cooke Boulevard and Jimmy Cliff Boulevard. Looking on at right is Acting Superintendent of Roads and Works at the St. James Municipal Corporation, Saad Campbell. Both Deputy Mayor Vernon and Campbell toured the Jimmy Cliff Boulevard, Howard Cooke intersections on Tuesday, January 25, 2022 where a total of four signs were installed.

Councillor Vernon’s warning to motorists came during a tour the Jimmy Cliff Boulevard-Howard Cooke intersection on Tuesday, January 25, 2022. He was accompanied by Acting Superintendent of Roads and Works at the St. James Municipal Corporation, Saad Campbell.

For his part, Acting Superintendent Campbell, said the signs were installed by the Municipal Corporation on Saturday, January 22, and are in place to encourage drivers not to block the intersections.

“The St. James Municipal Corporation will be placing more of these signs in additional areas shortly, which is a response to an urgent request from the Jamaica Constabulary Force (JCF) members who highlighted the intersections where traffic congestion was a major challenge.” Campbell said.

According to section 53.-(1) b. of the Road Traffic Act: A motor vehicle when not in motion- shall not be placed or allowed to remain in such a position as to obstruct or be likely to obstruct traffic.